How to Take Sacred, Medicinal Rapé with the Right Intention

Rapé (pronounced ha-PAY) is a preparation of powdered medicinal herbs – often with a tobacco base – that the Indians of the Amazon basin blow through the nose, either with a small V-shaped self applicator, or with the help of a buddy.

In contemporary Amazonia, sharing rapé is a common social activity with spiritual, pre-Columbian roots. Rapé is considered to be a sacred, shamanic medicine. It’s traditionally prepared by a knowledgeable shaman, however, the art of sacred rapé preparation has been passed on to non-indigenous rapé enthusiasts, so you can find makers of high-quality rapé outside tribal communities and in other parts of Brazil. Sharing rapé was traditionally done in a ritualistic way. Because the medicine can have stimulating or psychoactive effects (depending on what plants were used to make it) receiving rapé can bring about a profound experience of the Forest. Because the medicine is sacred, the Indians take rapé as a prayer calling upon the forces of Nature, the blessing of the animals of the forest, and power of medicinal plants to heal us and give us strength.

Nowadays, medicinal rapé is also making its way all over the world, through increasing cross cultural friendships between the Indians and non-indigenous friends, as well as through ayahuasca ceremonies held by traveling shamans. Rapé is increasingly being consumed in a more social context, in the way that sharing sacred tobacco shifted to social cigarette smoking.

To prevent your relationship with rapé from turning into an addiction and a personal vice, here are some tips you can follow to maintain the sacredness of the rapé ritual as a modern shaman.

The Right Way – and Wrong Way – to Consume Rapé

Rapé is administered with two different types of pipes, which are typically made from bamboo or bone. The first type of pipe requires the assistance of another person, who blows the snuff with a powerful blast into each nostril of the partner who is receiving the rapé. For that reason it is generally referred to as the blow pipe and, in Brazil, the 2-person pipe is called the “Tepi”. Beautiful Tepis made of bone

If you don’t have a buddy to blow medicine up your nose, don’t worry, you can do it yourself with a self-applicator pipe called a “Kuripe”. A Kuripe is a small V-shaped pipe that connects your mouth to your nostril. While it’s always harder to blow yourself than to have a friend blow you, trying to get a noob to blow you (who has no idea how to do it) is the least desirable option. Thus it’s always good to have your own Kuripe, and learn how to blow yourself, if you are a bona fide rapé enthusiast. What you don’t want to do is snort rapé off a smooth flat surface with a rolled up bill or straw. That is a major Amazonian faux pas – it won’t score you points with the Indians and might get you arrested by unamused Policia Federal for public cocaine consumption.

The Appropriate Set & Setting for a Rapé Ritual

Because the act of taking rapé is a prayer, the set and setting will impact the experience of your prayer. The best places to take rapé are outside in nature, at the altar during an ayahuasca ceremony, or in a quiet sacred space indoors, with high-vibrational music playing. Avoid taking rapé while waiting at bus stops, in busy commercial areas, in common areas with a lot of movement that is unrelated to spiritual activity, or where you might be interrupted by someone who has no idea what you are doing nor what it means. An ideal setting allows you to fully experience the effect of the rapé without distraction and have the space for quiet contemplation.

Also, depending on the medicinal plants that were used in the rapé blend, you may experience a wide range of sensations after taking your rapé, from emotional upwellings, to vomiting and bowel movements. Here are some tips to set up your space – and yourself – for comfort:

What to Expect From Your Rapé Experience

Your rapé experience will depend a lot on the medicinal rapé blend you are consuming. There are a myriad of medicinal plants that can be used in rapé and thus a wide range of experiences from a nice blast of fragrance in your nose, to an eye-opening nasal expresso shot, to a transcendental, wildly psychoactive experience lasting hours, where you want to fly like an eagle.

There are a few common side effects to taking rapé that you should be prepared for and certainly not ashamed of:

As with any kind of potent medicine, rapé can be abused and consumed in ways that are less sacred, and more recreational. Rapé can be hard on your sinuses, so overuse can create sinus problems and damage to your respiratory system. Also, because the medicinal plants in rapé blends vary, its effects on your system can vary. Misuse can lead to addiction or even send you to the hospital. For this reason, it’s important to test your rapé and with any drug, know where it comes from. Also, using rapé with other drugs, like MDMA, is not advised as the contraindications may be unknown. Rapé is frequently offered during ayahuasca ceremonies, but you may want to tune in and decide whether rapé is really what your body needs at that moment.

I took MDMA at a conscious music festival, and afterwards, I did rapé. It was a terrible combination. I felt nauseated, dizzy, and had no energy to walk around. I immediately had to go to the bathroom. Then I threw up. The rapé totally wiped out my MDMA experience. I will never to that again! ~ Anonymous

Because rapé is used shamanically, passing rapé can be a means for someone with ill intentions to put an enchantment or curse on you. It’s not a good idea to share rapé with people you don’t know and trust, or receive rapé from a shaman who you are getting “bad vibes” from.

As medicinal rapé appreciation grows around the world, rapé kits are increasingly part of the modern shamanic toolkit, and global shamans are finding themselves traveling with rapé and storing their medicine for longer periods of time due to the difficulty of procuring fresh rapé outside the Amazon. Here are some tips on how to care for your rapé and rapé applicators. Taking Care of Your Rapé Applicator

Care for your rapé applicator is going to depend very much on what materials were used to make it (bamboo, bone), hold it together (beeswax, durapox), and adorn it (string, feathers, stones, paint). Rapé applicators are sacred shamanic tools and typically kept at home on an altar or carried around in a medicine bag. You may want to keep your feather adorned tepi at home and have a simpler tepi for travel, because it’s really a bummer to discover that your beautiful tepi macaw feathers got crushed and broken in your backpack. Kuripe self applicators tend to travel better. In the Amazon, sharing rapé has become a common social activity. In indigenous culture, everything is shared, so the Indians don’t tend to place as much importance on keeping personal use items, well, personal. If you come from an individualistic society, like the United States, your rugged individualism and hangups about your personal stuff is going to stand out. Also, Indians tend to have a strong belief that using a shared object to consume medicine isn’t going to get them sick, because the medicine is sacred, powerful, and will prevent that – magically. That being said, what do you do in a situation where you have 5 people wanting to pass your tepi pipe around, and one of them visibly has a cold or flu?

The Amazon is a humid place. Using soap and water to clean your rapé applicator can be tricky as moisture can build up deep inside your applicator and grow mold, which is the last thing you want to be inhaling into your nose.

In the old days, rapé was stored in hollowed out gourds or giant snail shells. Nowadays, rapé made in the Amazon is typically stored in used soda bottles. Old plastic may not be the best container for long term storage of medicinal snuff. A preferred container by non-indigenous Brazilians are glass test tubes with screw tops. Not only are these easy to carry around, pouring rapé into the palm of your hand is also easier, because the shape of the container minimizes the avalanche effect that bottles with narrow necks can have.

With container with a narrow opening, you increase the likelihood of not being able to get all your rapé out, or know what’s going on at the very bottom if the container isn’t clear. 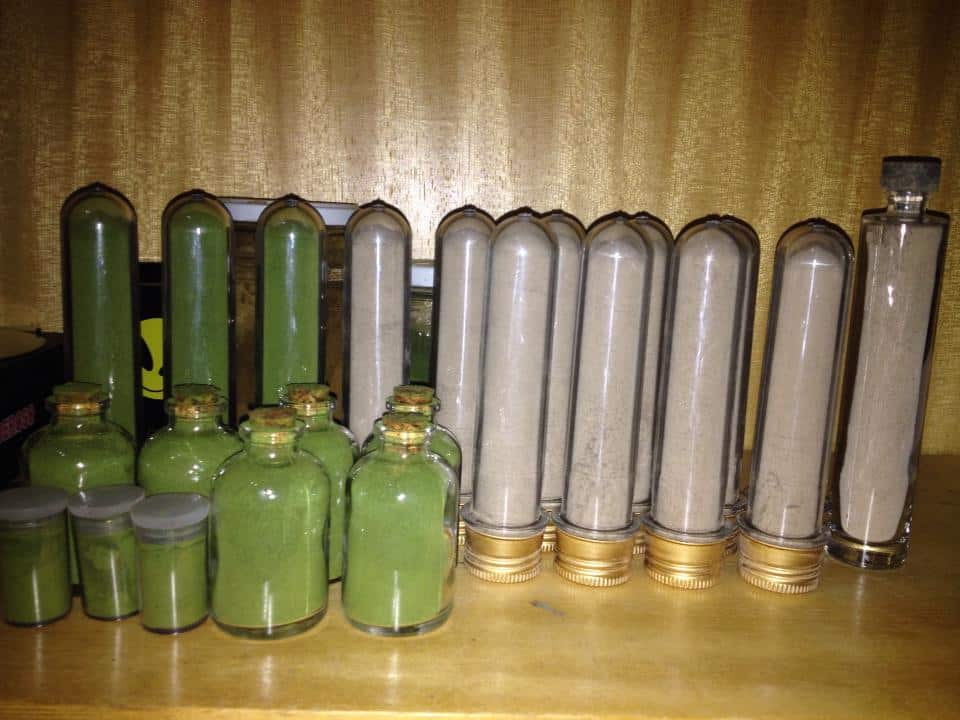 Glass test tubes are a great way to store and carry rapé.

Rapé needs to be stored in a cool dry place. Moldy rapé will tend to have a distinct, acrid smell to it. If you find that your rapé is starting to go, you can spread it out in cloth or smooth clean surface and dry it out in the sun.

Do bear in mind that medicinal rapé has a shelf life and loses its effectiveness over time, so holding onto it for as long as it will last is not the best idea.

Use it or lose it.

What Do You Think? Please Share in the Comments Below

About the author, Lorna

Lorna Liana is a new media strategist and lifestyle business coach to visionary entrepreneurs. She travels the world while running her business as a digital nomad. Lorna's boutique agency provides “done for you” web design, development and online marketing services for social ventures, sustainable brands, transformational coaches and new paradigm thought leaders. She is also a personal development junkie, and 20 year practitioner of shamanism, with extensive training in Tibetan Bon Shamanism and the ayahuasca traditions of the Amazon Basin.

My first encounter with Rapé (Ra-peh): The sacred shamanic medicine that gets blown up the nose.
March 04, 2018

The Modern Shamanic Guide to Taking Rapé – the Sacred Medicinal Snuff of the Amazon
February 11, 2018

How to identify and deal with spiritual egos.
January 20, 2018